Oregon State Credit Union was founded in 1954 on the campus of Oregon State College (now Oregon State University). Like many credit union origin stories, Oregon State’s began with a shoebox and $25. Bob Coyle, an associate professor of agriculture, started the Credit Union to serve the needs of the institution’s faculty, staff and families, and managed the cooperative from his small academic office. Fast forward almost 70 years, and Oregon State Credit Union converted from a federal to a state charter, allowing the cooperative to serve anyone who lives or works in 24 counties in western and central Oregon. The credit union currently serves over 134,000 members through 15 branches and offers a full range of services, including personal and business accounts, home and auto loans, commercial and business loans, credit cards, and investments and insurance services.
DOWNLOAD SUCCESS STORY

Oregon State Credit Union planned a major conversion to the Corelation KeyStone core banking system in the 2016-2017 timeframe. Erik Lubbock, Director of Core Applications Services and his staff of three administrators and four analysts were already very comfortable with automation, as the Credit Union had first automated its core processes in 2003. Lubbock sought to identify a leading workload automation solution that would integrate seamlessly with KeyStone and provide the same level of automation they were used to.

Lubbock also sought a workload automation solution that offered scalability, and could grow alongside the Credit Union over time.

Constrained by the strict project timelines of the core conversion, Lubbock sought a workload automation solution that offered built-in, out of the box integration with KeyStone. In his vendor search, Lubbock discovered that OpCon had already developed four critical connectors to KeyStone that supported running batch jobs, running administrative functions, deleting files from the export directory in the KeyStone server, and running Jaspersoft® reports. This sold it for Lubbock, because he knew he couldn’t risk critical time and staff resources working with a vendor to develop such integrations from scratch, when there was a proven solution that met all of the Credit Union’s key requirements.

“When I looked at what OpCon offered, I saw it had four connectors pre-built for Keystone,” Lubbock says. “And I realized all the things we needed to do for KeyStone on the back end were possible. Once I saw that, the selection of OpCon was easy, because I knew it would save us an enormous amount of time in development.”

Oregon State Credit Union began its OpCon journey in early 2016, implementing the solution in parallel with its KeyStone core conversion. The Implementation took 18 months, and the Credit Union went live on both platforms in October 2017. Lubbock appreciates how Oregon State CU’s relationship with SMA developed into a true partnership during the implementation phase, and says “SMA is one of the best vendors I’ve worked with.”

“Everyone had that same vision, which was evident during the on-site training sessions,” Lubbock says. “I remember when SMA’s team had a discussion around a finer point of automation, and thinking these guys really get what it means to want to automate workflows. They had the same mindset I had that this is something we need to put our focus on.

“SMA was the right vendor at the right time for us— they met me on the level I needed to be, to get what I needed done for the conversion. The SMA team came onsite on three different occasions for about a week each, and each time they came out, we implemented more advanced features of the OpCon product into our system, which was super powerful. By the time of their third visit, we got into more sophisticated projects like the LDAP integration, which has saved us a ton of time. That was really above and beyond.”

“Of all the vendors we worked with during our core conversion, SMA exceeded my expectations. They were wonderful to work with.” 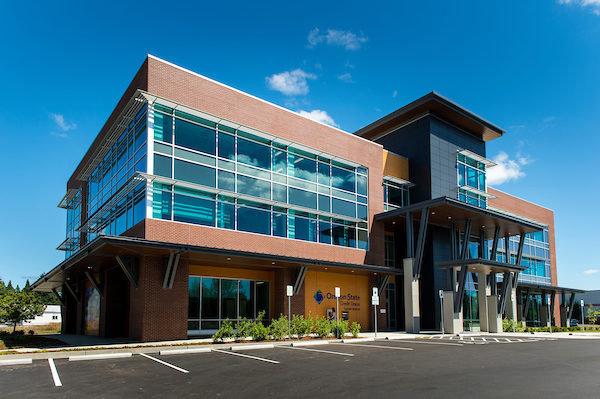 OpCon from SMA Technologies offers Enterprise Functionality and Scalability, without the Complexity.

OpCon delivers a broad set of advanced features that are very easy to set up and use - allowing organizations of all sizes to quickly scale automation across a wide range of complex jobs. OpCon offers several best-in-market benefits, including:

“One area that OpCon has been significantly better than [our prior automation vendor] is the ability to combine self-service workflows to enable our departments to launch complex processes,” Lubbock says. “It’s simple to use, and definitely a great evolution in efficiency over our prior automation system.”

“None of us here in the back office wanted to do operations tasks - we want to put new products into production. SMA had that same vision and mindset, from the top all the way through to the folks that I called on the phone throughout implementation.”

Oregon State Credit Union has attained game-changing results through the powerful combination of the OpCon workload automation solution and the Corelation KeyStone core, including:

“Instead of using Enterprise Manager to manually create new users and set passwords and permissions, we can now set that up in active directory,” Lubbock says. “OpCon simply looks at our organizational units and adds the information into the database with the proper permissions. So, when an employee is added or leaves the organization, the LDAP active directory just takes care of all that. The LDAP integration has saved me a ton of time.”

“We’re able to enforce dual control for ACH uploads to the Fed, which is part of our due diligence and regulatory requirements,” Lubbock says. “Whoever creates the ACH origination file from the core cannot also upload it to the Fed. We need to maintain a segregation of duties, and OpCon makes it seamless.”

“I've never seen OpCon slow down due to the number of workflows it's running concurrently— ever,” Lubbock says. “It's a very robust engine. And combined with KeyStone, if you want to do parallel processing, where you run more than one batch process at the same time, you can do that. On my prior core system, we ran everything sequentially, so it was ‘old school’ automation.”

Seeking Scalability Beyond the Core

With OpCon, Oregon State CU is enjoying the flexibility and scalability of an enterprise-level workload orchestration platform, without the complexity. Lubbock is eyeing future opportunities to deploy this powerful, modern workload automation system beyond the core, in other areas of the organization.

“We don't run batch jobs in Keystone—we use OpCon,” Lubbock says. “If we do want someone to be able to run a batch job, we'll give them a Self-Service button, because it’s the safest way to do it. So that's been a real enhancement.”

In the future, Oregon State CU is considering automating a variety of processes around the Credit Union, such as FICS mortgage origination platform (through OpCon’s pre-built integration API), and even the institution’s enterprise SQL servers. For now, the focus remains on automation in the core.

“If it touches the core and it requires some automation, then we're going to use OpCon to do it—we know OpCon can handle it,” Lubbock says. “For everyone else in the credit union, they get the advantage of OpCon’s automation without really being aware of it. Most departments are benefiting from the fact that we have the tool to automate pretty much whatever that they need to have done. We just take care of it with OpCon.”